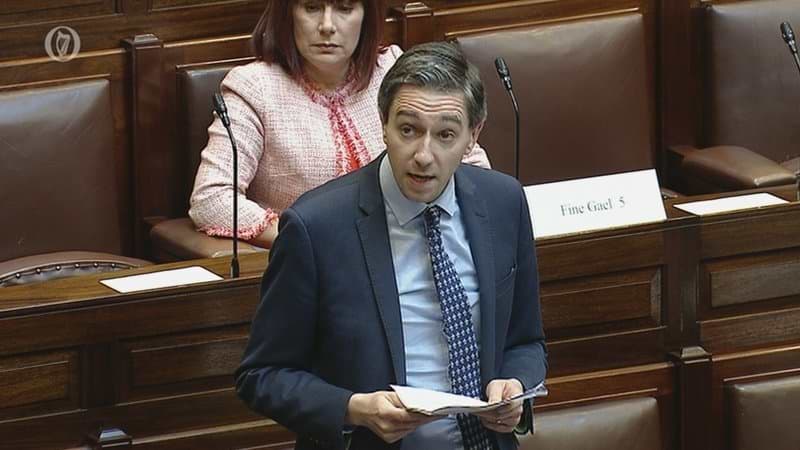 Health Minister Simon Harris introduced the legislation in the Dáil

The Dáil has passed emergency legislation that forms part of the Government’s response to the Covid-19 pandemic without a vote.

The Health (Preservation and Protection and other Emergency Measures in the Public Interest) Bill has two major components.

The first are the financial measures to pay people illness benefits if they are infected by coronavirus. There is also a payment if people lose their job as a result of the spread of the virus.

The new laws will allow the State to shut down mass gatherings and to potentially order groups of people in certain areas to stay in their homes.

There are regulations too that would allow for the detention of a person, on foot of a medical recommendation, if they refuse to self-isolate.

Minister for Health Simon Harris proposed that the new powers of detention contained in the Bill remain in place until 9 November.

He said the powers would only be used in the public interest to keep people well, adding that picking a date was an arbitrary process and it was prudent to pick November.

The Minister also said that the legislation would empower authorities to shut down house parties.

Fianna Fáil justice spokesperson Jim O’Callaghan raised the wording of the legislation and said it should be clarified when the Bill reaches the Seanad tomorrow.

The 20-minute conversation focused mainly on the Covid-19 situation.

They agreed on the need to keep in contact and align their actions, in so far as possible, on the matter.

Mr Johnson outlined the steps he announced yesterday to close schools in the UK. The Taoiseach welcomed this decision, which had brought a greater closeness between the position in Ireland and Northern Ireland.

They also discussed developments in Europe and internationally and agreed on the importance of close co-operation in the context of the operation of the common travel area between Britain and Ireland.

Separately, Minister for Housing Eoghan Murphy has said he is self-isolating “as a precaution”.

A spokesman for Mr Murphy said the Minister made the decision after returning from visiting family abroad, adding that he travelled before any travel advice was issued.

The Minister “has maintained a full work schedule via phone and teleconference like many across the country at the moment,” the spokesman said.

Earlier, Minister Harris told the Dáil that political leaders have an important role in responding to the mental health challenges the coronavirus pandemic poses, in terms of the individual and national anxiety that exists in Ireland.

He said the crisis is having an immense impact on society, describing these as “unparalled and extraordinary circumstances”.

He said the primary objective of the bill is to safeguard the lives of citizens and to ensure they have sufficient financial resources.

Mr Harris said that “we are living in extraordinary times” and now “is not the time for petty party politics”.

He said he accepted that the measures being proposed by the Government to address the crisis must be time limited, but there must be an option to renew them by government order.

Mr Harris described them as “exceptional measures in the interest of public health”.

The Ceann Comhairle opened Dáil proceedings by describing today as an “important sitting”.

Seán Ó Fearghaíl said: “We meet this afternoon in limited numbers at a time of great crisis for our country.

“However, much as we try to tame the world we share with so much else we are rarely true masters of our own destiny.

“Something as cruel and capricious as coronavirus has come from nowhere to challenge us.

“We arrive here today to debate, at social distances from each other in the chamber, utterly shaken and taken aback by the events of the past few days and weeks.

“This legislation is the first step in this long and difficult journey,” he added.

Fianna Fáil’s health spokesperson paid tribute to healthcare workers, who he said are putting themselves in “harms way” and are working night and day to make sure the healthcare system is ready to deal with Covid-19 patients.

Stephen Donnelly said business people all over his Wicklow constituency have been offering help, and he said the response from the community has been incredible.

He said the figure of 10,000 cases of Covid-19 by the end of March is a very large number and is a figure that would happen if Ireland had not introduced the measures it had.

Mr Donnelly said the growth of cases in other countries is coming down and that the difference Ireland can make is enormous.

Sinn Féin leader Mary Lou MacDonald told the Dáil that there is a tough few months ahead, and that people have listened to public health advice by cancelling get-togethers over the weekend.

However, she said, tens of thousands of people went back to work “to factories, to construction sites to places where there is no prospect in being able to practice social distancing, where there are no hand sanitisers and where there is no adequate protection”.

She said those people are worried they are bringing the virus into their homes and that they wanted to know the emergency legislation will protect them.

“The fear of the virus is matched by the fear of bills that cannot be paid and that mortgage payments cannot be made,” Ms McDonald said.

“Now, in the eye of this new storm, the State must deliver for the people,” she said.

The leader of the Green Party said that everyone in the political system had to show solidarity during the Covid-19 crisis.

Eamon Ryan told the Dáil that his party would commit to do whatever they could in working with other parties as needs be in the coming months.

He also said efforts needed to be made to maintain mental health during the emergency.

Meanwhile, the Labour Party leader Brendan Howlin said people are showing extraordinary resolution and community spirit in sticking to the new rules of social distancing and other “life altering” advice from the public health authorities.

He said the Labour Party will support the emergency legislation which, he said, “is a vital part in our national effort to challenge and overcome this menacing coronavirus”.

Mr Howlin said the party did have some concerns over the different definitions in the Bill’s terminology; referring to the descriptions in the Social Welfare Act amendment and the health parts of the bill where people are described as probable cases of suffering with Covid-19, potential cases, or showing signs and symptoms. He said this was confusing and that it should be explained so nobody falls in the gap of ambiguity.

Today’s Dáil sitting was an unusual one as a maximum of 30% of the 160 TDs were requested to attend. This includes 11 TDs each from Government, Fianna Fáil and Sinn Féin.

There were four Green TDs, three from the Regional Independent Group and two TDs each from other parties and groups.

TDs were also asked to maintain an appropriate distance in the chamber.