The unborn has no fundamental rights under the Constitution other than the right to life, lawyers for the State have told the Supreme Court. 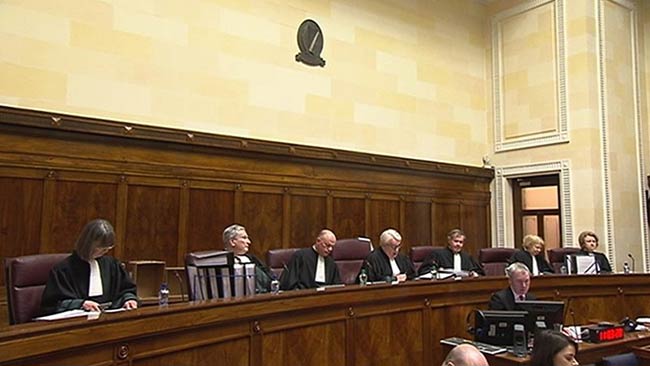 Seven Supreme Court judges are hearing the case over the next two days.

The court is considering the extent of the rights of the unborn in an appeal taken in an immigration case.

The case involves a Nigerian man, his Irish partner and their child, who was unborn when the legal proceedings began in 2015.

The State is appealing a ruling by the High Court that the unborn has rights extending beyond the right to life in the Eighth Amendment to the Constitution.

This case arises in the context of what the Minister for Justice must consider when deciding whether or not to revoke a deportation order against a foreign national person who is about to become the parent of an Irish citizen.

The High Court found, and lawyers for the man, his partner and their child will argue, that the unborn enjoys extensive constitutional rights, and these must be taken into account by the minister when making a decision.

The State argues this is not the case and the only right of the unborn under the Constitution is the right to life.

Senior Counsel Mary O’Toole, who is making submissions on behalf of the State, said the minister must take into account all of a person’s circumstances in a deportation case, but the fact that a man is the prospective parent of an unborn carries no particular constitutional weight.

Ms O’Toole said birth was a “bright line” with regard to constitutional rights and you either fall on one side of that line or on the other.

Lawyers for the other side will say the minister must take into account the prospective constitutional rights of an unborn Irish citizen.

Ms O’Toole said there was no definitive right to life in the Constitution – and therefore no other constitutional rights – for the unborn before the Eighth Amendment was brought in in 1983.

Any rights in exceptional cases involving inheritance for example, or the ability to sue for injuries sustained in the womb, were created by legislation.

Ms O’Toole said the right of the unborn to life had to be balanced in the Constitution with the rights of the mother. She said it was not possible to see them as separate entities.

Ms O’Toole is expected to outline the State’s appeal for the rest of the day. Lawyers representing the other side are expected to address the court tomorrow.

In his High Court ruling in July 2016, Mr Justice Richard Humphreys found the unborn was clearly a child and had constitutional rights going beyond the right to life in the Eighth Amendment.

He found that a reference to protecting and vindicating the rights of “all children” in Article 42a of the Constitution, includes the child before birth.

The State has said the High Court findings could affect the functions of Government departments and State agencies dealing with expectant parents.

It says there are now conflicting decisions from the High Court on this issue and clarity is a matter of general public importance.

The court agreed to hear this appeal urgently in the light of the planned referendum on repealing the Eighth Amendment.

Ms O’Toole said the reference to “all children” in Article 42a of the Constitution – inserted after the Children’s referendum – was not intended to go as far as including the “unborn”.

She said “unborn” could not be easily interchanged with “citizen” or “person”.

She said the court would be put in the position of deciding at what point an unborn becomes a ‘person’ and this was a hugely controversial and difficult subject.

Ms O’Toole said the word ‘unborn’ was put into the constitution in the form its in to make sure it could not be qualified and to give as broad a protection to the right to life as possible.

Ms O’Toole also submitted that the right to life of the unborn was balanced against a life in being in the Eighth Amendment and it would be difficult to transfer the “unborn” into other parts of the Constitution where there was no such balance.

She said the relationship between the mother and unborn was a unique phenomenon – they were inextricably bound together and not an area where rights could be easily balanced.

She asked if the Government had to vindicate the rights of the unborn beyond the right to life, would they have to make all women of child bearing age take folic acid.

Ms O’Toole said that if it had been intended that the words all children in Article 42a were to include the unborn, the reference would have been more explicit.

The State’s view was that if the rights of the unborn extended beyond the right to life it would have ramifications for areas outside immigration – for medical treatment, succession law and agencies such as the Child and Family Agency.

She said it would completely change the landscape as it was understood up to now.

She said the issue of including the unborn in the definition of child could not be approached without reference to the range of consequences which were difficult to predict.